Our Pine Siskins are getting very tame, probably because the vertical bird feeder gets topped up with nyger seed at least once a day. Today there were so many at the feeder, I put some seed into my hand and held it near the feeder to see if they would take the seed out of my hand. Here's the result. Photos by Kevin. 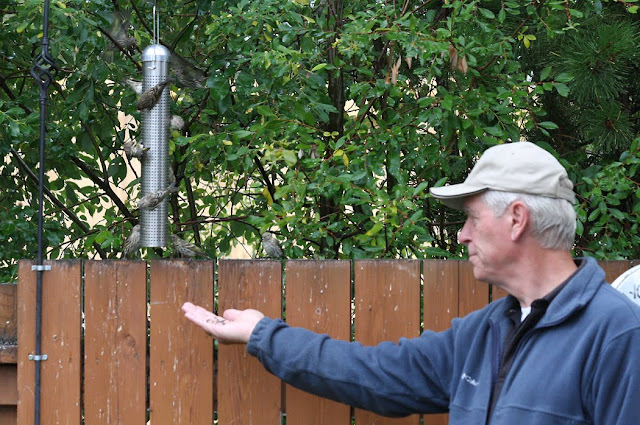 Here I'm making the approach. The birds just continue what their doing at the feeder. 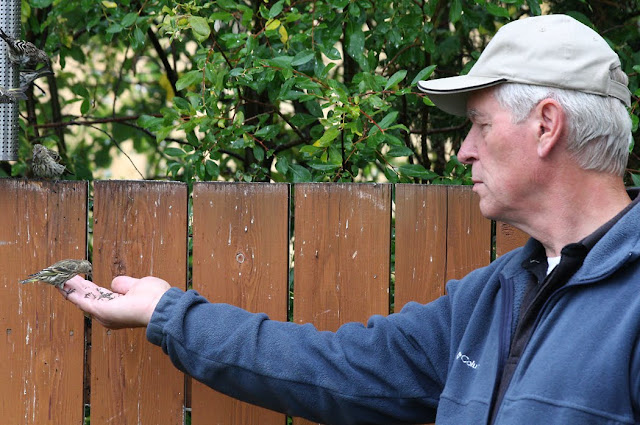 Now one is brave enough to land on my hand and check out the nyger seed. 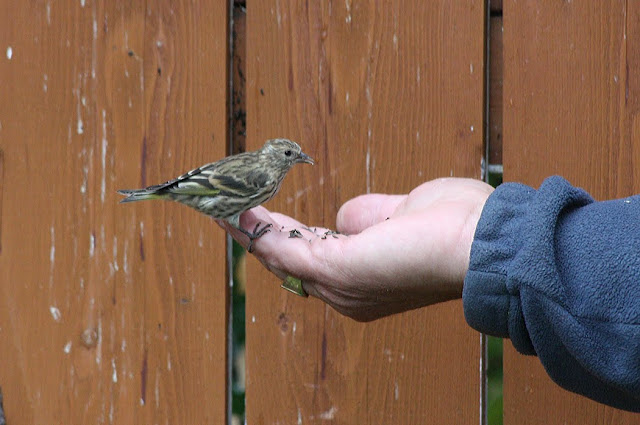 "Yep, it's the same stuff as in the feeder. Awesome!!" 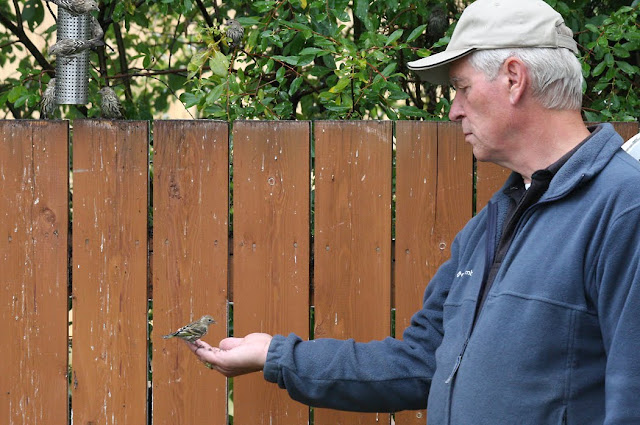 I'm able to lower my hand and the bird just stays.
Posted by Hank Moorlag at 11:06 PM 3 comments:

Now that the garden is at its peak, here are a few full garden pics. 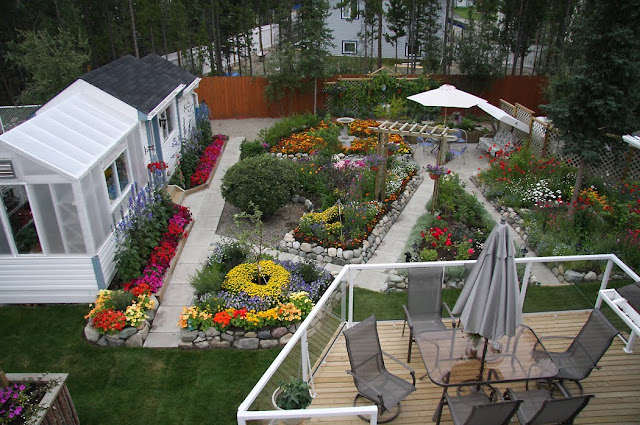 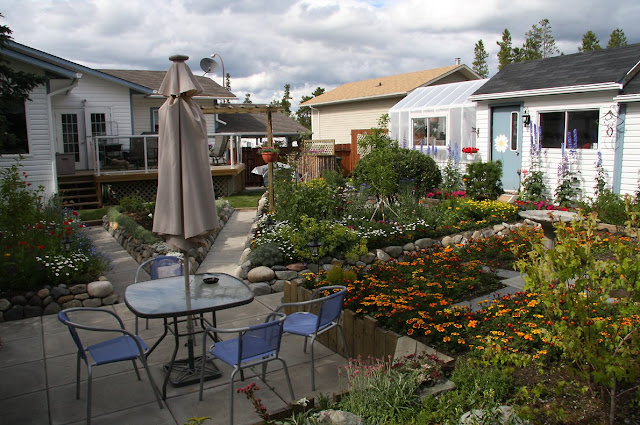 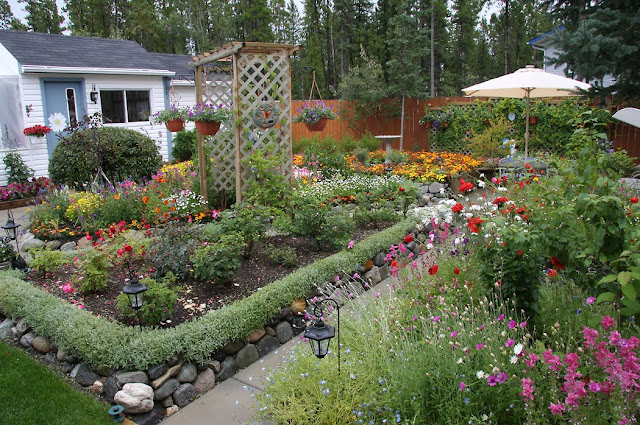 Our fence and gate construction project is finally complete! 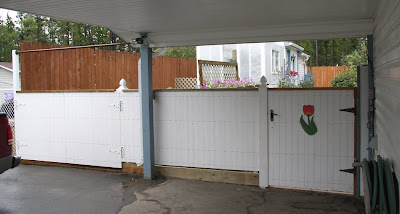 Our critics say it's 'overkill' because of the method of construction, but it is solid. Each section has a 3/8" plywood core, with 3/4" boards mounted vertically on the front (glued and screwed), and boards mounted horizontally on the back (glued and screwed). This gives us panels almost 2" thick that, when mounted with strong hinges, produces a gate that will definitely not sag. Top rails of 2X4 material, grooved on the underside to accept the panels, complete the construction.  Last summer I accidentally backed the utility trailer into the left side gate and had to pull down the gate for extensive repairs. Our son Kevin says if I back the trailer into this gate, I'll have to do extensive repairs to the trailer.


Of course, the carport gate would not be complete without decoration. We found some tulip clipart on the internet and chose this one to enlarge and paint, adding a nice decorative touch and recognizing the Dutch connection. 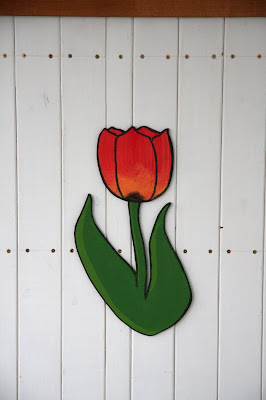 The rock garden is beginning to develop nicely in its second year.  Check out these pics ... 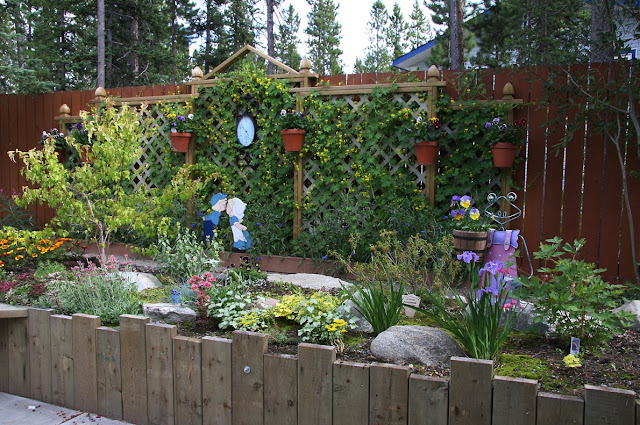 The rock garden was built up with gravel and topsoil, using recycled deck boards as a retaining wall.  To prevent the retaining wall from falling away from the garden, wire cables were strung from eyebolts at two locations and anchored at the back of the garden under the gravel during construction.

The background lattice work design was copied from a feature we saw in a gardening magazine, and we think it works great here.  It's covered with canary bird vine and has chalon pansies in pots hanging on plastic clips.

Miss Froggy in the rock garden proudly presents some Ultima Morpho pansies.  The smooching Dutch couple was a gift some years ago from my folks.  And the garden clock on the lattice was given to us by friends this spring. 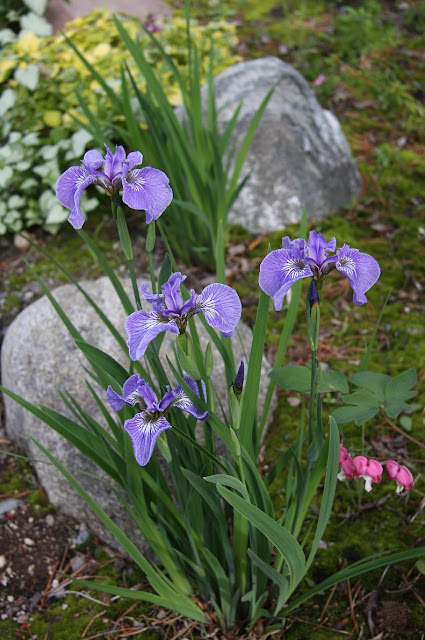 We just love this dwarf iris in the rock garden.  The blooms don't last long, but they're so perfectly formed and a delight to see. 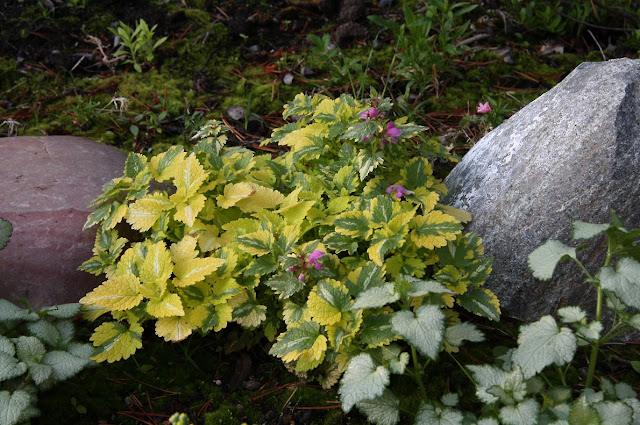 This yellow lamium adds an interesting color to the rock garden, and its low-lying habit makes a great ground cover. 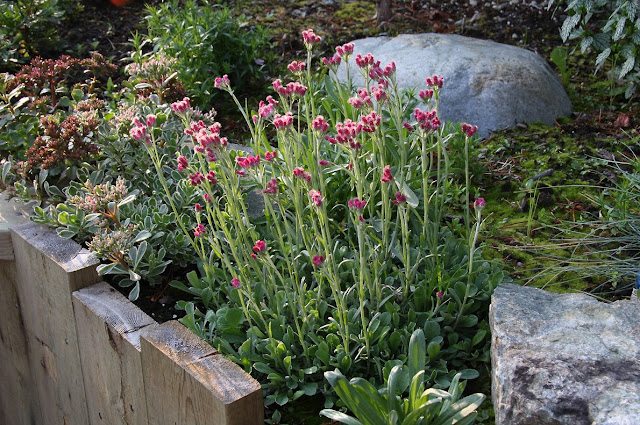 These are Pussytoes, so called because the blooms resemble the toes of a kitty. 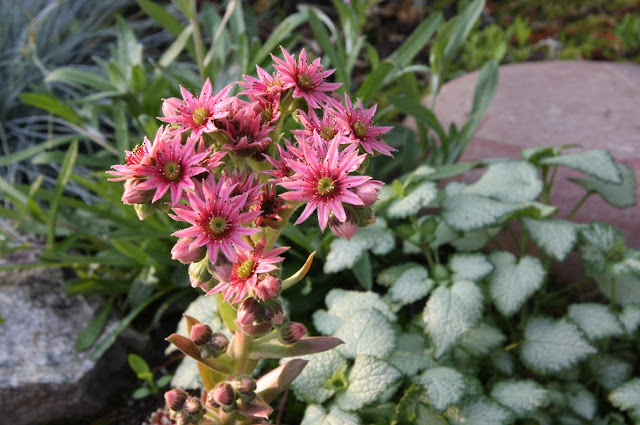 This plant, Sempervivum - commonly referred to as 'hens and chicks', is the subject of some interesting folklore in Europe. The blooming plants are said to bring homeowners good luck - so we're very pleased we have one. And it seemed to work, too! We were very blessed this summer with wonderful weather and a nice garden.

Planting sempervivum on the tiled rooftops was believed to prevent lightening strikes - presumably based on the idea that the plants would tend to dissapate the effect by absorbing the surge of electricity.

The healing power of sempervivum's sap seems to be similar to that attributed to aloe vera - speedier healing of cuts and scrapes.

The medieval alchemist, Albertus Magnus, determined that sempervivum mixed with arsenic and alum combined in the gall bladder of a steer would produce a coating for the hands that would then allow glowing hot metal to be picked up without getting burned. As they say, "Don't try this at home!"
Posted by Hank Moorlag at 7:36 PM 2 comments:

During warm summer days people want to be near the water, and birds want to be at the bird bath. Here are some Pine Siskins enjoying the garden and the water. 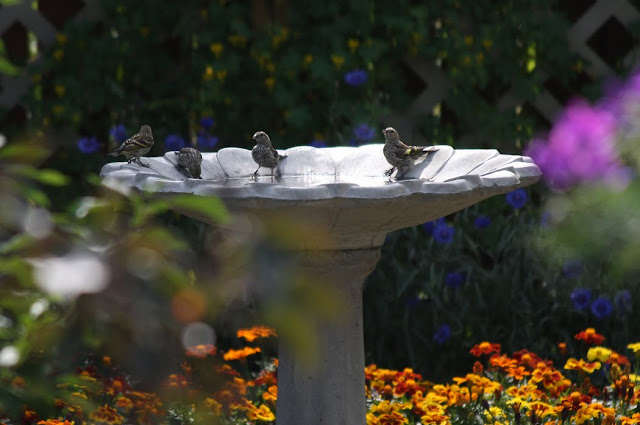 "OK, you test the water first. I think it might be too cold." 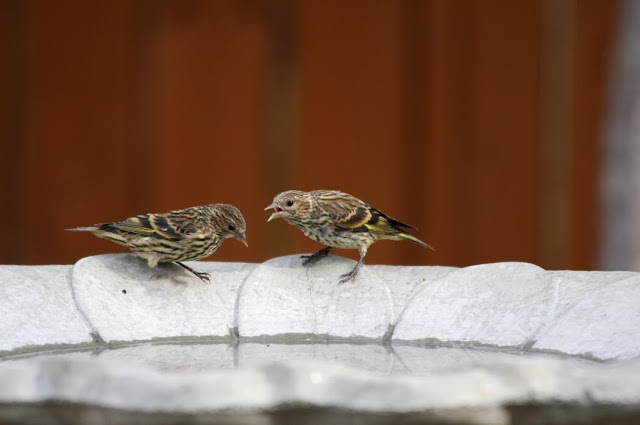 And just like with people in hot weather, whether on the beach or on the highway, tempers can flare. OK, children, just settle down and enjoy the water. 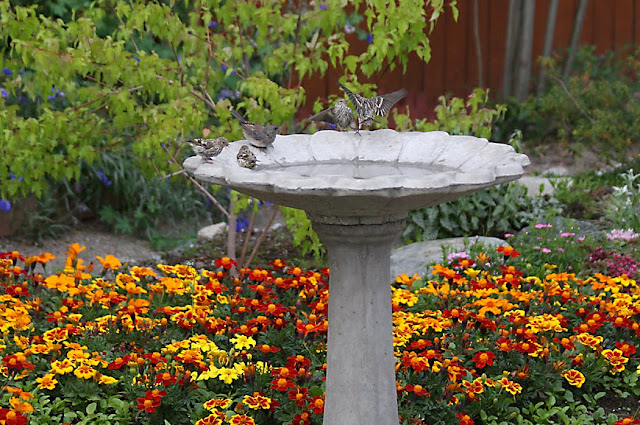 Return of the Pine Siskins

You know August has arrived when the Pine Siskins return to the vertical feeder. And they're quite tame, too. Here I'm approaching the feeder when there were about 10 of them picking out the nyger seed, and this one just decided to stay. He's saying, 'Excuse me, but I'm trying to have lunch here. 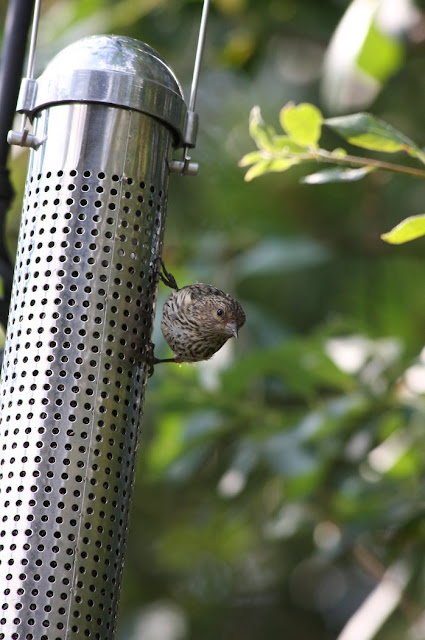 Posted by Hank Moorlag at 7:30 PM No comments: